They might have walked off into the sunset at the end of Netflix’s reality dating show Single’s Inferno, but Kim Hyeon-joong and Song Ji-a didn’t seem to have a happily ever after.

After the show ended, Ji-a, 25, clarified that she is single while model Hyeon-joong confirmed in an Instagram Q&A that the cast members still keep in touch with each other.

Recently, though, 28-year-old Hyeon-joong caught the attention of netizens after he unfollowed Ji-a on Instagram amid her scandals.

Just two days ago, the social media influencer — who built her brand on being young, pretty and rich — admitted to wearing fake designer items and apologised for it.

And yesterday (Jan 19), she came under fire after a report claimed that she doesn’t own the S$3.4 million Seoul apartment she showed off on her YouTube house tour video.

In an interview with South Korean media outlet Maeil Business Paper, the hunk — who had described himself as a puppy looking for Ji-a’s attention in the dating series — was taken aback at claims that he was trying to “cut ties” with her.

“We still have good feelings toward each other and we still contact each other in between broadcasts. What reason would I have to cut ties with her? I can’t share with you the details of my conversations with Ji-a because of the broadcast contract and also other reasons, but I want to say I have no ill feelings towards her,” he explained.

As for unfollowing her, Hyeon-joong said that he did it because she wasn’t following him to begin with and he didn’t want to set tongues wagging.

“There are no other reasons. To be honest, at that time, I didn’t even know she was embroiled in a controversy.”

He added: “I couldn’t contact her more because of the reports. I’m actually cautious about talking about this right now but from what I experienced, Ji-a is a really kind and bright person. She’s someone who lives diligently.” 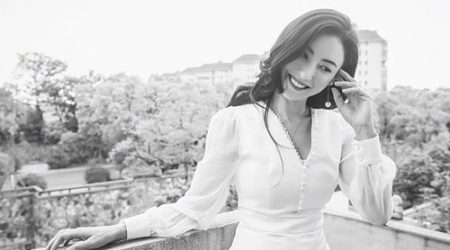